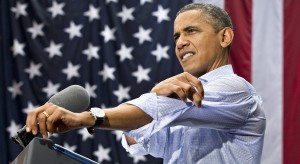 FILE – In this July 14, 2012, file photo, President Barack Obama holds a campaign rally in a downpour at the historic Walkerton Tavern & Gardens in Glen Allen, Va. Nearly four years after Barack Obama was elected to the most powerful office in the most powerful country in the world, the question remains: Who is he? This is a man who seemed to come out of nowhere. He had served seven years in the Illinois state Senate, and less than four years in the U.S. Senate _ a meager political resume, augmented by a stirring speech at the 2004 Democratic National Convention. (AP Photo/J. Scott Applewhite, File)