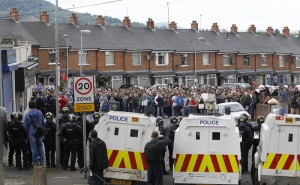 Nationalist rioters clash with Police Service of Ireland officers in the Ardoyne area of North Belfast, Northern Ireland, Thursday, July 12, 2012. Trouble broke out after an Orange Order march passed the area. The Twelfth of July is the busiest day of the marching season in Northern Ireland with thousands of Orangemen and women, accompanied by marching bands, taking part in hundreds of parades. The Orange Order holds its main Belfast event, which commemorates King William III’s 1690 Battle of the Boyne victory over Catholic King James II. (AP Photo/Peter Morrison)