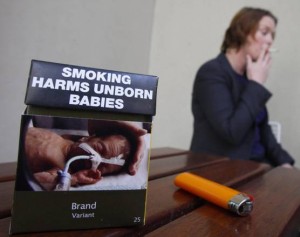 epa03362016 A generic plain packaged cigarette pack is displayed during a press conference at Parliament House in Canberra, Australia, 15 August 2012. The High Court of Australia today rejected the legal challenge by tobacco companies against Australia’s plain packaging of tobacco laws. Australia’s highest court ruled on 15 August 2012 it was legal for the government to make tobacco companies package cigarettes without prominent branding. The High Court found the latest anti-smoking legislation did not break laws requiring ‘the acquisition of property on just terms’. It was a test case watched in Britain, Canada and New Zealand where there is pressure to follow the lead in further restricting tobacco advertising. World-first laws requiring almost identical olive-green packs with large, graphic health warnings were passed in 2011 and are to take effect in December 2012. EPA/LUKAS COCH AUSTRALIA AND NEW ZEALAND OUT