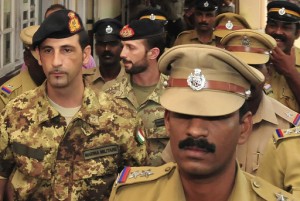 Italian marines Massimiliano Latorre, left, and Salvatore Girone, back center, are escorted by Indian police officials from a court in Kollam, India, Monday, March 5, 2012. An Indian court has ordered two Italian marines held in jail while officials investigate last month’s killing of two Indian fishermen at sea. The marines are accused of shooting the fishermen on Feb. 15 after mistaking them for pirates off India’s southwest coast. The marines had been providing security on a cargo ship. (AP Photo)