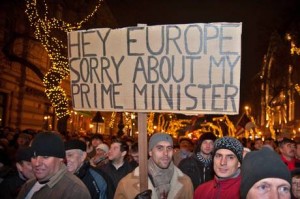 epa03047667 A protester holds a sign at a demonstration called by civil groups and three opposition parties against the government and the new constitution of Hungary near the Opera House in Budapest, Hungary, 02 January 2011. Top government and state officials are celebrating Hungary’s new constitution, which came into effect 01 January 2011 at the Opera House with a gala evening. The new constitution was passed by the governing Fidesz party that holds a two-thirds majority in parliament. EPA/BEA KALLOS HUNGARY OUT