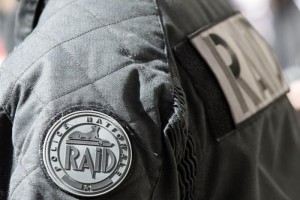 epa05267334 French officer of the RAID (French police task force) attend a dicourse of French Interior Minister Bernard Cazeneuve after his meeting with the heads of the French intervention units at the Beauvau Palace in Paris, 19 April 2016. This meeting aims to a better coordination between the units. EPA/ETIENNE LAURENT