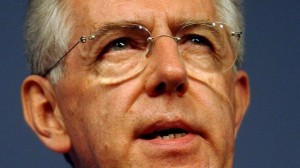 LapresseFILE – In this Tuesday, Oct. 19, 2004 file photo, European Union Commissioner for Competition Mario Monti gestures while speaking during a media conference at European Commission headquarters in Brussels. Italy’s president has unexpectedly named Wednesday, Nov. 9, 2011, as a senator-for-life Mario Monti, the former European competition commissioner who is widely considered to be a top contender for the Italian premiership, now that Silvio Berlusconi has pledged to resign soon. The surprise move Wednesday night could be a prelude to Monti’s getting the nod to head the next government. President Giorgio Napolitano’s office announced he had chosen Monti, who now runs prestigious Bocconi University in Milan, for the honor. Senators-for-life include notable figures outside of politics and have voting privileges in the Senate.