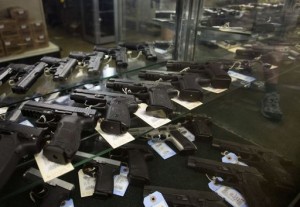 AURORA, CO – JULY 22: Hand guns are displayed at Firing-Line July 22, 2012 in Aurora, Colorado. Firing-Line is located not far from where suspect gunman James Eagan Holmes, 24, is accused of killing 12 people at a screening of the new “Batman” film last Friday. Joshua Lott/Getty Images/AFP== FOR NEWSPAPERS, INTERNET, TELCOS & TELEVISION USE ONLY ==