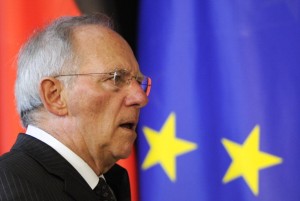 German Finance Minister Wolfgang Schaeuble arrives to attend a signing session between Germany and Russia during the 13th annual German-Russian cabinet meeting at the Herrenhaeuser Gardens in Hanover, northern Germany, on July 19, 2011. The leaders of Russia and Germany hold a joint cabinet meeting amid growing German dependence on the gas-rich country due to Berlin’s recent decision to scrap nuclear power. The 13th annual such get-together will be joined by major business delegations from both sides. AFP PHOTO / ODD ANDERSEN (Photo credit should read ODD ANDERSEN/AFP/Getty Images)