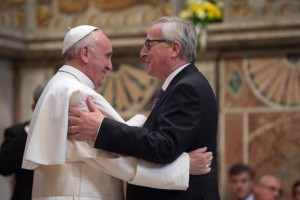 epa05291910 Handout image released by Vatican newspaper L’Osservatore Romano on 6 May 2016 shows Pope Francis (L) greeting European Commission President Jean-Claude Juncker (R) during the ceremony for the award of the Charlemagne Prize to Pope Francis, Vatican City, 06 May 2016. Pope Francis on Friday received the Charlemagne Prize, awarded annually since 1950 by the German city of Aachen to people who have contributed to the ideals upon which Europe has been founded, with top EU officials in attendance. EPA/L’OSSERVATORE ROMANO HANDOUT HANDOUT EDITORIAL USE ONLY/NO SALES