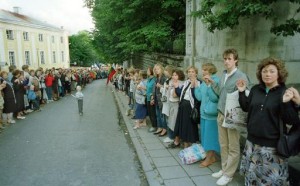 The inhabitants of Tallin holding hands stage a huge demonstration 27 August 1987 in the capital of Estonia, then part of the Soviet Union, against the Molotov-Ribbentrop Pact (signed in Berlin 23 August 1939 authorizing the Soviet Union to annex the three Baltic republics) during a rally called “The Human Chain”. 600,000 inhabitants of Estonia, Lithuania and Belarus gathered 23 – 27 August 1987 along 520 kilometers across the three Baltic republics to protest the 1939 German-Soviet non-aggression pact.