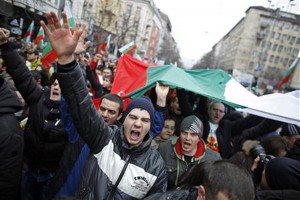 Thousands of demonstrators march shouting slogans during a protest against high utility bills and monopolies in the energy sector in Sofia February 24, 2013. Tens of thousands of Bulgarians marched through cities across the Balkan country on Sunday, protesting against high utility prices and energy monopolies and demanding sweeping political changes. Public anger with high power bills in the European Union’s poorest member state forced the rightist government of Boiko Borisov to resign, but the move failed to calm down people, fed up with low living standards and rampant corruption. REUTERS/Stoyan Nenov